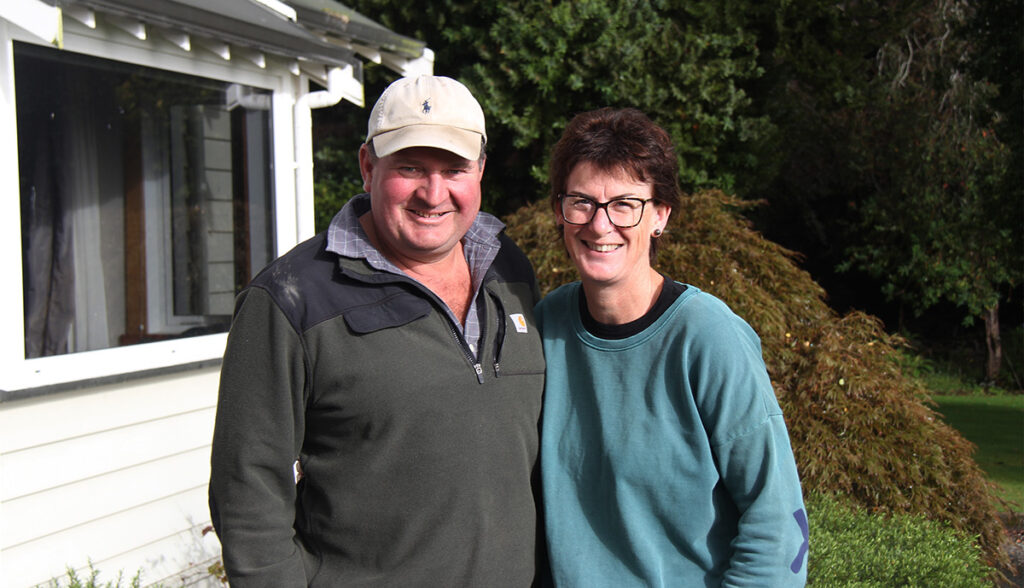 Five generations have failed to dull the curious and pioneering spirit which drew the McKenzie clan from Scotland to Southland 161 years ago.

Greenbush Farms Ltd is today farmed by Scott and Chris McKenzie – a disarming couple – who have doubled the size of this family property during their 20-year tenure.

Their 760ha rolling country home block at Fortrose ranges from 16m to 87m above sea level, and is bordered by a long stretch of deserted southern coastline – with sweeping views across Foveaux Strait to Bluff.

Greenbush Farms was converted from sheep to dairy in 2007-2008, but there is much more to this operation than its 920-950-cow herd. The family winters 1800 dairy cows for three other operations, and it leases an additional 600ha, which carries 400-head of trading cattle.

Dairy in the history

The dairy comprises 60% of the farm’s income. While on the surface it appears to be a fair departure from its forebears’ 4000-head sheep enterprise, Scott says his mother’s family dairy farmed in Canterbury, and there has always been threads of dairy farming deeper in the family heritage – captured in pictures that line the generous corridors of their gracious family home. Scott and Christine’s combined welcome makes it feel like you’re walking into your best friend’s home.

They joke that their neighbours also converted to dairy because they thought it looked like they were having too much fun on their side of the road. Scott and Christine ran up

to 3000 ewes during their transition to dairy while they established a new 54-bale rotary dairy. As the dairy business grew, Council regulations thwarted their plans to build a second dairy, so they turned to wintering dairy cows – which have free access to open silage faces – among the sand dunes that border the property. The visiting cows are managed within their separate herds on separate sections of the coastline – all with separate loading ramps.

For the last 12 years the couple have relied to their manager, Brad Gibson, to take a lead role on the day-to-day operations. Annual Rainfall is 1060ml and while they get snow showers through the winter, frosts are kept at bay by the sea breeze. They are able to grow 17Kg DM a day through the colder months.

The couple continue to push themselves – and the farm – for performance, which led them to MilkMap’s Senior Farm Business Consultant [Southern Regional Manager] Conal Harkin.

MilkMaP focusses on “Milk”, “Management”, and “Profitability” – by analysing the cost structure of the business – and the impact of any proposed feeding/stocking rate changes.

This is their second season with Conal. Their production is 11 percent ahead of last season, and they are on track to produce 465,000kg Milk Solids (MS) with a per cow finish of 500kg MS.

“When we brought Conal in, I didn’t think we were going too bad,” Scott said. “We were probably more about making sure we were accountable with what we were doing.

“We wanted to see if there was better ways to do things, and to make sure Brad [Gibson, herd manager] had everything he needed. I’ve had farm advisers before and sometimes they don’t add anything. But, I liked Conal’s manner, and that he suggested ideas without forcing his thinking on us.”

The biggest change was their decision to split the cows into three herds [based on production], so they could embrace MilkMap’s signature “Grazing120” philosophy. It works by offering 120% of each herd’s daily pasture allocation where the paddock size allows for it. The fresh paddock is deliberately opened up on the evening feed (to protect the herd from overnight feed shortfalls).

There are no electric fences to shift, because all of the herds are given the entire paddock – with the goal of leaving it with residuals of between 1650 and 1800 kgDM/ha.

The herds return to those paddocks after the morning milking, and are checked around 10-10.30am to assess how much feed is available. If necessary, the cows are then moved.

The addition of some strategic supplementary feed on the shoulders of the season has solved some seasonal feed consistency issues, adding to their bottom line. Average milk fat in Mid-March was running at 5.5% and protein was 4.6% – for a total MS average of 10.1%.

This season they spent an additional $100,000 on Palm Kernel and 100 tonne of grain, which has added an additional $260,000 [calculated on a $7.60kg MS payout] to their bottom line, while also improving stock health.

“When we were feeding silage, it was hard to keep the protein and fat percentages consistent, because the grass varies so much at different times of the year,” Scott said.

“So, we started consistently feeding an average of 2kg of crushed barley in the shed. Then we started feeding Palm Kernel [PK] in troughs, so the herd didn’t drop off. It has been the first time we’ve done that, and we’ll probably use 130 tonne for the whole season.

“I think it’s just about staying open, learning, and making sure we’re hearing about new ideas. Conal is seeing a lot of other farms, and he brings that energy and knowledge to our farm.” 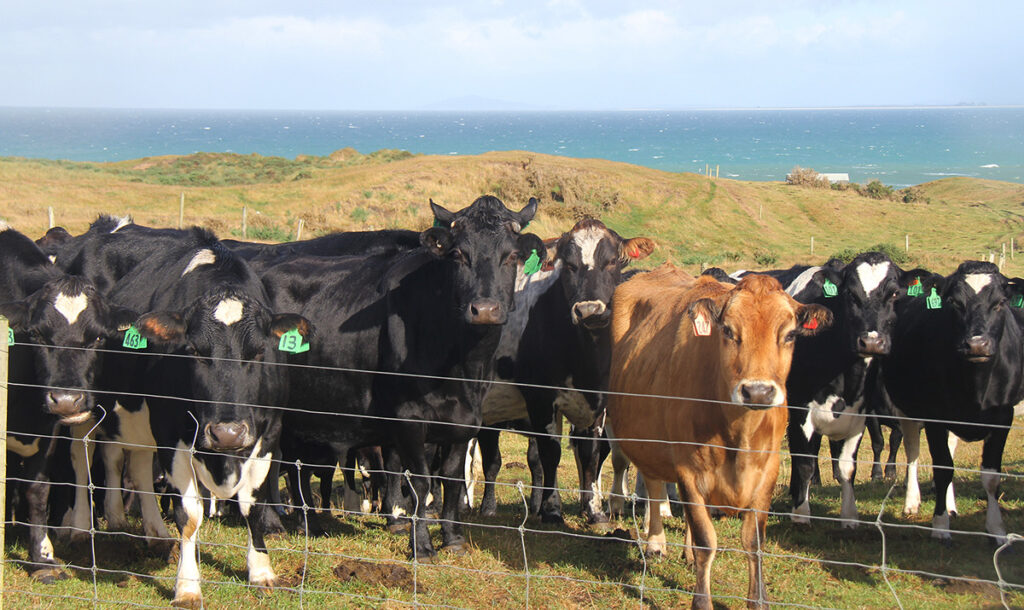 Christine, who still spends a lot of time in the calf sheds, adds that she sometimes gets the cows in for the team, and the difference in the herd health has felt palpable for her.

“I’ve definitely noticed that the cows definitely look better in themselves,” she said. “Whether it’s the smaller herds, or the change in feed, I’m not sure. But I keep telling the guys that the cows look amazing.

“They are also calmer. Because I’m not there all the time, I really notice those changes. There isn’t lame cows, they are full of milk, and they are actually a pleasure to bring in.”

Scott said that Brad plates the whole farm so they know where they are at with pasture residuals. Scott used to be comfortable grazing the farm down to 1600 at the end of the season. Now, Conal encourages them to ‘stick to the plan’, and maintain it at 1800.

Part of the herd’s production improvement has been attributed to their decision to feed a lead feed* 10 to 14 days before calving. It has also impacted on Milk Fever cases.

*Lead feed is a combination of protein and starch grains mixed with anionic salts and trace minerals with dry matter to makes sure cows are achieving as close to zero or a slightly negative dietary cation-anion difference.

“We used to have 80 to 90 cows getting milk fever,” Scott said. “Now, it’s more like seven to 14. It’s been unreal having the lead feed. We feed it in bins in the paddock for 10 days before calving.”

The cows’ strong metabolic start to the season has also contributed to some cows achieving 600kg MS.

Their operation’s grazing business, means they know exactly how much it costs to bring a heifer to the milking herd – between $1700 and $1800. To that end, while their calving pattern is tight from August 12 to the end of September, and they mate for eight weeks [four weeks of AI], there are second chances given at Greenbush.

If a cow doesn’t hold in-calf and she is aged under five years with more than 500kg MS, they will carry them over, and give them a chance to rest and re-calve in.

It’s hard to believe in a world that moves so fast, that this farm remains firmly in the family with the sixth generation – under no pressure – also keen to come home.

They have three children, Olivier, 21, [who is coming back to the farm], Georgia, 18 [in her first year at Lincoln University] and Elliott, 16, [year 12 at Southland Boys’ High School].

Christine says, “We have stipulated to them throughout that they don’t have to be the sixth generation here. But Oliver is quite keen on the farm and Elliott is also taking an interest. Georgia is studying valuation, so time will tell.”