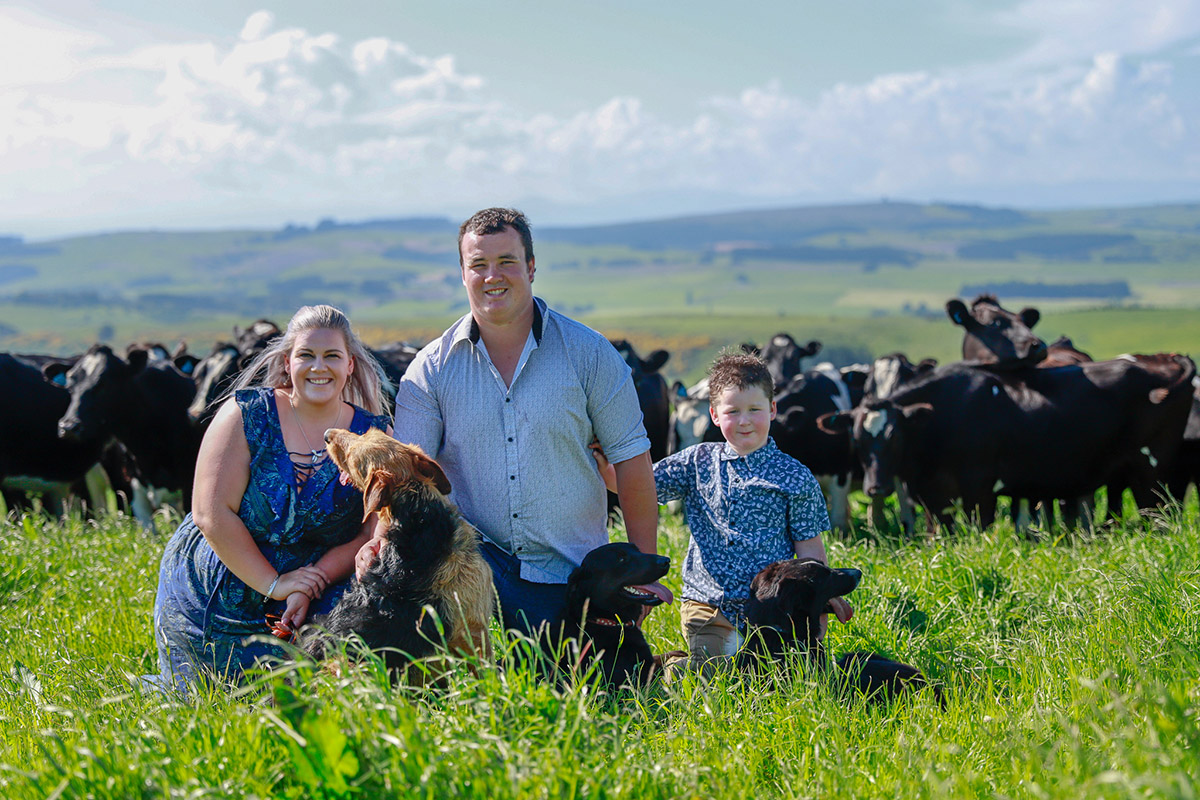 James and Steph Matheson have invested in land, and have amassed almost $1 million equity off the back of Southland dairying. They are pictured with their nephew, Bronson, who lives with them. Photo: Alicia Keown Photography.

“Sink or swim” took on new meaning for James Matheson when he said “yes” to working on a dairy farm in Gore, aged 19.

James didn’t know how to milk a cow; he didn’t know the difference between a herringbone or a rotary dairy, and he was thrust into the hot seat in the 680-cow operation.

James was left with no choice but to swim like he was born in the water.

Today, he has done more than survive with Chris rewarding the 27-year-old by allowing him to amass close to $1 million equity within his role, during his journey from a novice trainee through to the manager’s role.

In the last 12 months James and his wife, Steph, bought their first 35ha, which has been incorporated into the milking platform, as they start to focus on their own wealth creation.

James was the 2020 Southland/Otago Dairy Manager of the Year [finishing runner-up in the national final]. And, this year, he was proud to watch his 2IC, Sam Bee, qualify as a finalist in the trainee section for the Southland-Otago region.

This season Tarrington Farms is projected to finish with 345,000kg Milk Solids (MS) from 680 cows after a cold, wet start to the spring on an unforgiving [wet and dry] property. It breaks down to 507kg MS per cow [without a feed pad] on a 2.2 cow per hectare stocking rate.

They had a 80% in-calf rate after six weeks of mating, which compares to the industry national average of 65%.

James looks back to his start with a wry shake of his head. One of his main advisors over the last seven years has been MilkMaP’s Senior Farm Business Consultant and Southern Regional Manager, Conal Harkin.

MilkMaP focuses on “milk”, “management” and “profitability” by analysing the business’s cost structure, and the impact of any proposed rate changes to feeding or stocking.

Tarrington is one of MilkMaP’s longest running Southland clients, and it has bucked production trends for the area. Part of that comes down to MilkMap’s “Grazing120” philosophy.

It works by farms offering 120% of their daily pasture allocation where the paddock size allows for it. The fresh paddock is deliberately opened up on the evening feed (to protect the herd from overnight feed shortfalls).

There are no electric fences to shift, because James gives their two herds the entire paddock – with the goal of leaving them with residuals of between 1650-1800kgDM/ha.

The herds return to those paddocks after the morning milking, and staff check them around 10-10.30am to assess how much feed is available. If necessary, the cows are then moved.

“I always had the philosophy of really wanting to feed the cows,” James said. “Conal explained how that could work profitability, which gave me confidence.”

Conal says James’ has now developed a strong understanding of ruminant nutrition, which was as important for the herd health and performance as it was for the financial success of the business.

“He’s also had great results with the fertility and production gains that can be achieved by using lead feed [for springers], and paying close attention to transition feeding [fresh cows],” Conal said.

James confirmed they were offering their cows up to 25kg DM [in addition to 2kg meal fed in-bale]. It had contributed to Tarrington’s 2.3kg MS per cow production peak. They were still averaging above 1.8kg MS in early March.

“It is profitable for us to feed at those levels. Once you fully understand how every decision impacts on the cow’s overall nutrition and the feed budget, it does take the guesswork out of it,” James said.

He adds that it is a fallacy to think cows eat everything in the paddock.

“People pretend that the cows eat 100% of what they’re offered, but they don’t because nothing is 100% efficient. What you offer and what actually gets eaten is one of the big take-home messages I took out of the Grazing120.”

“Because you can do everything without making money, if you do it wrong,” James said.

James has now also put Sam through the Dairymaster course.

“It’s one of the first things I always get my staff to do, so they get a base knowledge,” James said. “Their starting point is then where most people get to after 20 years of farming. It helps to have them understand a lot of how we think and operate from day-dot.

“I reckon I could nearly teach that course myself now,” James smiles.

Ahead of the curve

James says he’s comfortable with the farm’s progression, and his continued collaboration with Conal.

“I’d say we farm to what the environmental needs are going to be in the next five years,” James said. “We have a lower stocking rate, we’re producing more per cow, and we’re growing more home-grown feed.

“That’s how we already farm and I think it’s how everyone’s going to get forced to farm.