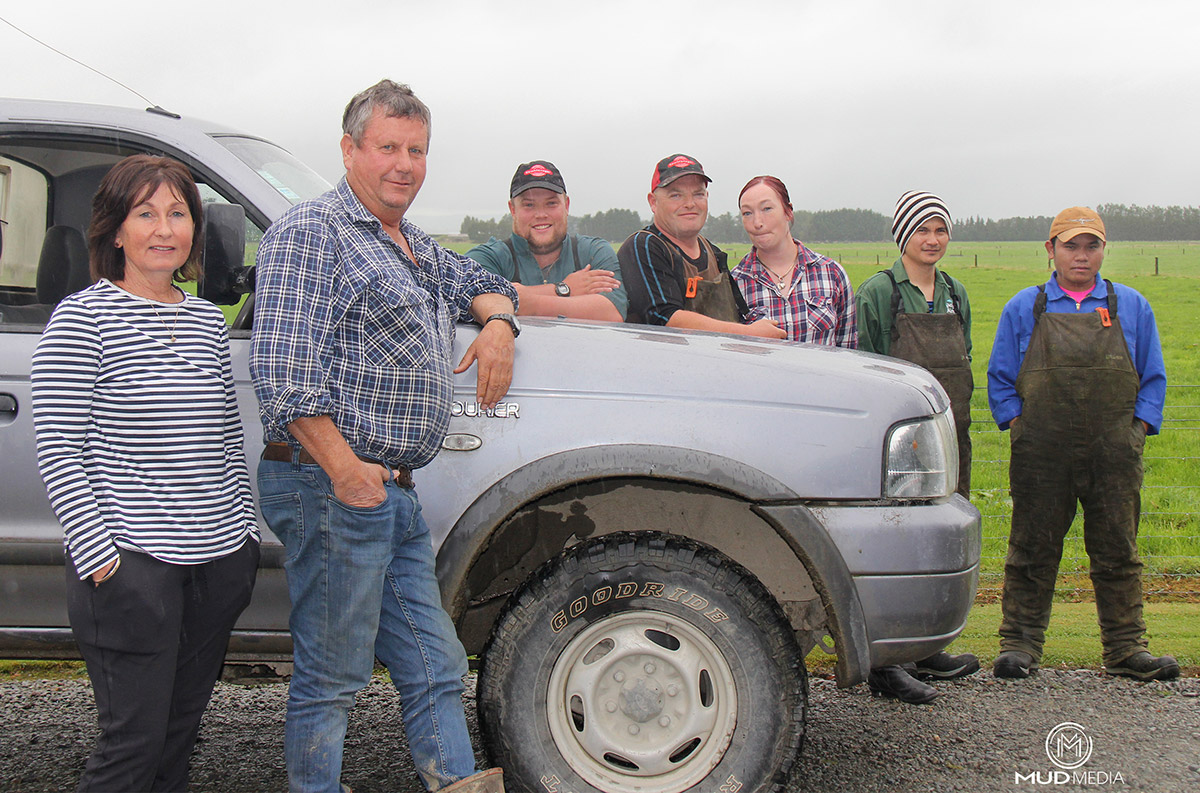 Third-generation Southland sheep and cropping farmers Shane and Vicki Murphy, who began dairy farming in a joint venture using their neighbour’s dairy – are today averaging 535kg of milk solids per cow on a 750-cow herd.

The South Hillend property has grown and changed over the years from 162ha (400-acre) to 384ha (950-acre) home block; this includes a freshly purchased 101ha (250-acre) neighbouring property, which will be used as a grazing and beef block. Combined with a 243ha (600-acre) run-off an hour away at Te Anau, this couple have proved there are many ways to enter the industry without following historical formulas.

When the Shane and Vicki decided to dip their toe into Southland’s dairying boom in 1996, they did it with neighbours Bill and Kate Reid. The Reids contributed 81ha (200 acres) and a 50-bale rotary, and Shane and Vicki contributed troughs and laneways to their then 162ha property. The two couples worked the operation collaboratively, milking upwards of 1200 cows and with the Reids taking 66% of the milk cheque. After four years, the natural forces pushing industry growth meant it was time to pursue their businesses individually.

Shane said, “We were open to dairying in the first place, because I wasn’t really a sheep lover. We could see where it was heading, and initially it didn’t cost us too much to start up.

“When Bill and Kate bought some more land, and we bought more land, we were starting to have too many cows, and we decided it was time to split the businesses and, we then put a 50-bale rotary dairy on our farm in 2000.”

At that point they owned their herd, had a 283ha [700-acre] milking platform, and the Te Anau block. Production was running at 485kg per cow with a 2.8-cow/ha stocking rate.

Change in the wind

A critical change in their business was the day their friend Johno Riordan shared a new philosophy he had read about in a farming magazine in a waiting room. It talked about “Grazing120”. Shane liked the sound of it and decided to investigate.

A subsequent meeting with MilkMap’s Senior Farm Business Consultant, and Southern Regional Managerm Conal Harkin, would change their business. And challenge their thinking.

MilkMaP focuses on “milk”, “management” and “profitability” by analysing the business’s cost structure, and then the impact of any proposed rate changes to feeding or stocking.

Its “Grazing120” philosophy works by farms offering 120% of their daily pasture allocation where the paddock size allows for it. The fresh paddock is deliberately opened up on the evening feed (to protect the herd from overnight feed shortfalls).

There are no electric fences to shift, because the Murphys give each of their three herds the entire paddock – with the goal of leaving it with residuals of between 1650-1800kgDM/ha.

The herds return to those paddocks after the morning milking, and staff check them around 10-10.30am to assess how much feed is available. If necessary, the cows are then moved.

“Because if they ran out of feed in the night they were starved then, and then they’d go back into the second half of the paddock, and be starved again.

“At that time, we brought Conal on to give us a fresh set of eyes for us and our manager at that time, who had been with us for 12 years. We wanted to change with the times, and that’s what we’ve done.

“It’s been hugely beneficial for us. Conal never pushed us. He listened, and he just gave us choices. I don’t go to discussion groups, and Conal is on a lot of farms, so we just wanted to tap into his knowledge and nutritional advice.

“Our whole operation has changed since Conal joined us. We never measured grass before. We had a plate meter, but we didn’t do pasture walks religiously.”

Both have been gratified by their production gains, profitably and with how content their cows are now.

Shane said MilkMaP’s advice in the lead-up to calving, including fresh cow management, had also had a major impact on the herd’s production, contributing to an average projected production of 535kg milk solids (MS) per cow this season.

This has been achieved on a low-input feed system, with a daily per-cow proposed ration of 18-20kgDM pasture, and an average 2kg grain mix fed in-shed. 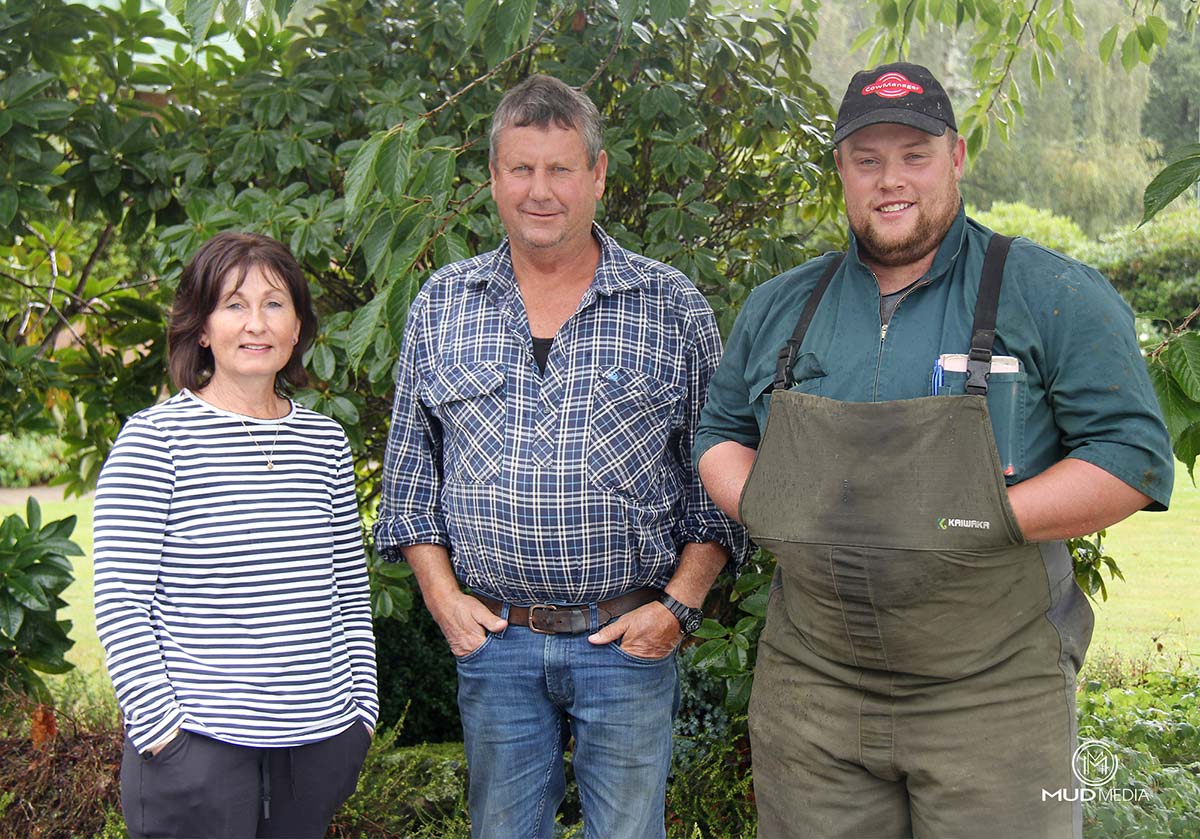 Shane and Vicki’s manager, Gary Sunshine-Tervit, and his wife Daniella will step up to contract milking for the Murphys for the 2021/22 season. Gary, who was recently named Southland-Otago Dairy Manager of the Year in the Dairy Industry awards, is also now a Grazing120 convert.

“When Shane and Vicki first told me about it, I thought it was a bit strange. I’d had 14 years of shifting fences, and I couldn’t see how it could work. But after two years of doing it, I’d never go back to shifting fences again.

“It’s definitely a much better way to manage cows for production and contentment.

“It’s also less stress on the cows, and it’s great to see them fully fed. You’ll go there at 10.30 in the morning, and you walk amongst them and they do nothing at all. You’ve got to go and actually get them up to make them go anywhere, because they’re so relaxed.”

The couple’s second in-charge, Chey Howley, is also firmly on the Grazing120 page and enjoys sharing knowledge with their team.

Chey said, “It’s good for the farm assistants because they learn a lot about it too. We plate the paddock, and work out how much grass is left. Everyone is involved in what we’re doing here.”

Other management changes and growth within the business have included installing three HerdHomes over time, with concrete-slatted floors covered in rubber matting. They act as feed pads and are also used for springer mobs and calving. The umbilical cord effluent system, which runs underneath the cows, is cleaned out once a year, mixed with water, and recycled on the paddocks to contain nitrogen leaching.

It has also taken the pressure off the pasture in spring, and helped hold production on the miserable days. Calves born in the HerdHomes are DNA’d, which is easier and quicker for staff, without compromising precise record-keeping.

The cows are also all fitted with Cow Manager ear tags. It keeps track of their temperature, movement, rumination, eating and activity.

Herd tests are completed four times a year, and combined with the Cow Manager data, the herds are sorted into five different feed groups, based on production. The top cows in each year-group also have blood tests/liver biopsies before mating (as a herd barometer) to check the herd’s average mineral levels and status (which are dispensed via in-shed feeding).

Calving starts early August, and mating starts from October 25. They will carryover around 40 to 50 vet-checked young cows on the runoff every year, and give them a second chance to get in-calf.

Adding lead feed to the dry cow ration 10 to 14 days out from calving has made a massive impact on their fresh-cow transition, and therefore its peak milk production. It’s also basically eliminated any downer cows.

Shane said the downer cows were “a bit of a nightmare, now, it’s pretty much a non-issue”.

Teamwork has been the foundation of the Murphys’ property. Gary steps into a contract milking position next season as Shane, 59, and Vicki, 53, look to still be involved, without having to live every day-to-day moment.

Vicki said, “We’re getting older, so we decided to employ a farm manager and mentor them into a contract-milking position. So that’s what we did.

“In the last 18 months, we’ve come a long way: we’ve set up a lot of seasonal plans and Shane and I felt comfortable stepping back, knowing the work will be continued through Gary and the team. We are looking forward to it.

“We have deliberately run our cow-to-staff ratio at four instead of three, so we have had good cover in the busy seasonal times…like calving. We find it eases the pressure when any of our team take their four-week leave entitlements, rather than relying on relief staff.

“We firmly believe this farm is all about a team effort, and we can’t operate it without everyone’s input – including Conal – who has turned our farming practices around.”

“Everyone wants this next step to be a success,” she said. 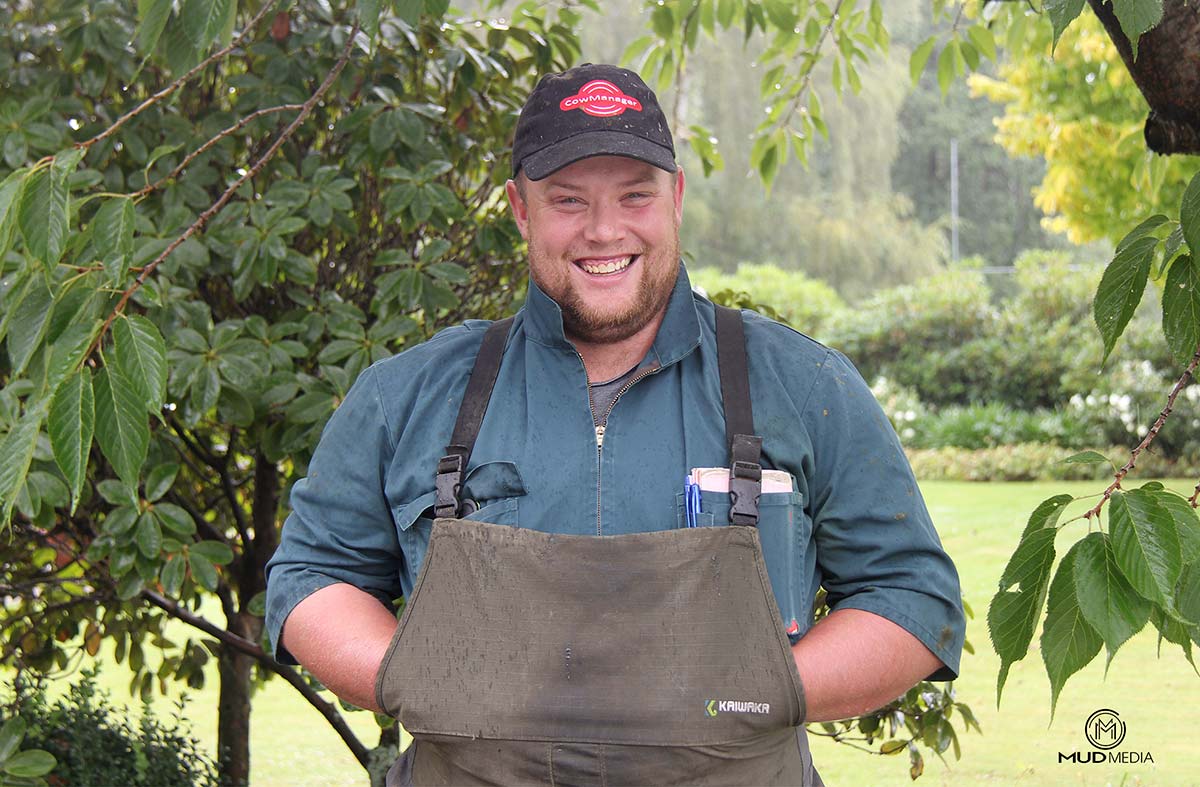 Gary Sunshine-Tervit moves on to the national finals of the Dairy Manager of the Year awards after winning the 2021 Southland/Otago section of the annual dairy industry awards. Photo: Mud Media.

Chance of a lifetime

For Gary, it’s the chance of a lifetime.

“Farm ownership for people like me now – while not out of the question – is significantly harder than it was 15 years ago,” Gary said.

“Shane, Vicki and MilkMaP have definitely helped me manage the cows differently than I had in the past, and this opportunity represents stability for me and my family, in addition to progression and wealth creation.”

Further cementing Gary’s progress, has been making the final of the Dairy Manager of the Year in the Dairy Industry Awards, which will be announced in Hamilton on May 15.

Shane and Vicki are also involved in a 50/50 equity partnership on 243ha (600-acre) at Flints Bush, near Thornbury with Trevor and Annette Alexander.

Shane said, “We decided on this partnership as we knew the Alexanders also worked closely with Conal as sharemilkers, and that meant they had the same way of thinking and doing things as us.” 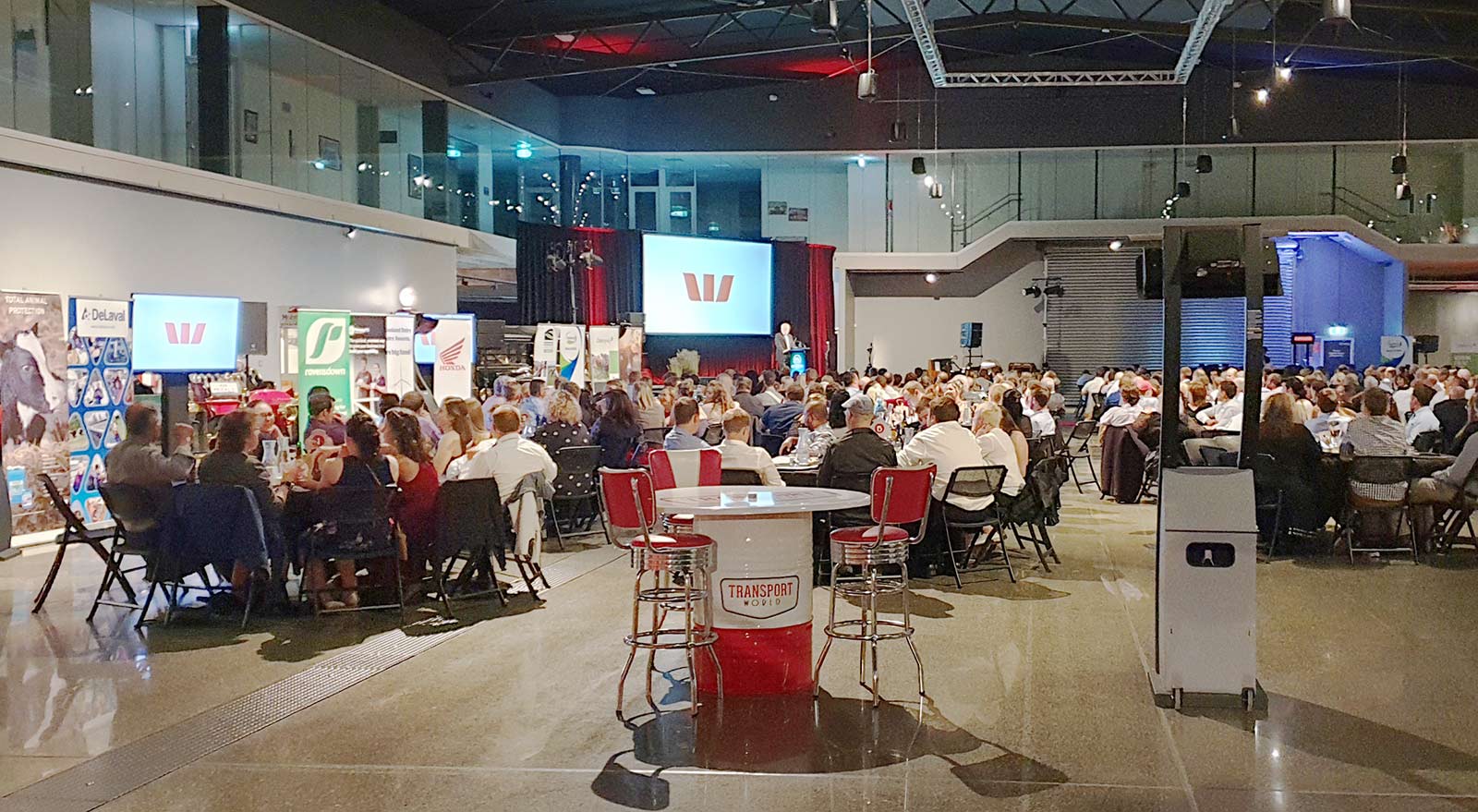 The Bill Richardson Transport World at Invercargill was the backdrop for this year’s Southland/Otago Dairy Industry awards. Photo: Conal Harkin

In hindsight, much of this farm’s growth and development has been fuelled by that one conversation which was started by a farming article in a waiting room.

Vicki said, “A lot of this has come to us through word of mouth. That’s the best promotion a business can have, I think. Conal’s manner and style has made him popular and approachable with all his clients.

“Ultimately, everybody just wants the best for the farm, the cows and our team.”