Getting more milk from less cows pays the bills and makes life easier for Gibson Farm at Hawera in the Taranaki.

David Gibson, who owns the operation, has enjoyed an easy working relationship and tight friendship with his manager, Mike Smith, over the past two decades.

This has allowed the pair to shape the 192-cow, spring-calving herd (formerly 220 head) on 62 effective hectares at the base of Mt Taranaki. The fully Jersey herd is averaging 570kg of milk solids (MS) per cow.

That puts the LIC sire-proving herd’s production at 130% efficiency per kilogram of bodyweight in MS in 290 days in milk. To reach this juncture, they have found an additional 100kg MS per cow by making some crucial tweaks to their herd management.

This season – with close to 30 less cows in the herd – they are more than $55,000 ahead in total production income. And, they are poised to drop cow numbers further to 180, as they continue to focus on more production per cow.

David and Mike have knocked on many doors to find their farming answers as they determinedly drilled down to their operation’s sweet spot. This has also included David’s personal decision to farm in a partially biological space, consciously reducing the amount of nitrogen used on-farm.

When it comes to their production gains and the change in their business direction, they credit senior consultant at MilkMaP Consulting, Rensinus Schipper, who has been with the operation for close to seven years.

MilkMaP includes a focus on “milk”, “management”, and “profitability”, by analysing their clients’ cost structure, and the impact of any proposed feeding or stocking-rate changes.

Their big changes to achieve that included dramatically dropping the amount of palm kernel (PK) they were feeding, introducing in-shed feeding (as grass management improved), switching to MilkMaP’s signature “Grazing120”, and making use of MilkMaP’s detailed herd-test analysis. The analysis identifies their highest-production cows, the herd’s production performance range, and evaluates the improved performance of the first and second-lactation cows.

Rensinus says, “At their peak, David and Mike were feeding close to two tonnes of PK per cow a year. The first thing we focussed on was reducing that. They had lost some cows at different times, which had been devastating for them. PK had also contributed to high infertility in their herd because the PK has no mineral density whatsoever, with the obvious exception of copper.

“Over the next few years, we were able to reduce their stocking rate without losing overall production as we lifted per-cow production because of their improved pasture management and herd health.” 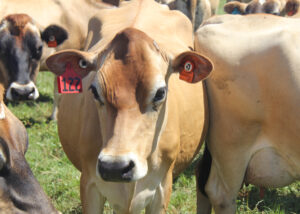 David and Mike also quickly note increased cow comfort, which improved everything on-farm, while also taking the feed pressure off the non-irrigated property.

David says having Rensinus on-board has been a significant confidence-booster for them both.

“It’s possible that cows can be getting enough energy and still be hungry or, be getting all this fibre so they can’t eat another thing, but still be lacking energy. That’s why we have a nutritionist,” David says.

“Rensinus likes to have the cows 100% full. If they are 90% full, they are still hungry. When they are 100% it makes their production work a lot better for our operation.”

Another bonus has been the reduced daily workload because they have less cows – validating their decision to continue to push to fully feed their herd on a System 5.

“Milking less cows – that are happier – is just so much more enjoyable. Because when they are happy, we are happy.”

David and Mike have now introduced in-shed feeding in their 20-bail herringbone at 5-6kg per cow per day.

David says, “Since the in-shed feeding went in, the cows are slow to move out – and some don’t. They actually come back into the dairy. We certainly don’t need a backing gate.

“They will come over and bunt you and play with you now.”

The changes in grazing management includes implementing MilkMaP’s Grazing120 system. It works by offering 120% of each herd’s daily pasture allocation, where the paddock size allows for it. The fresh paddock is deliberately opened up on the evening feed to protect the herd from overnight feed shortfalls.

There are no electric fences to shift, because the cows are given the entire paddock – with the goal of leaving it with residuals of between 1650-1800kgDM/ha.

The cows return to the paddock after the morning milking, and are checked around 10-10:30am to assess how much feed is available. If necessary, they are then moved or given more silage. 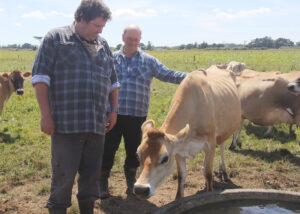 David and Mike have also welcomed Rensinus’s herd-test analysis. The algorithm gives them a detailed breakdown of production, and strips out breed and age advantages and disadvantages – levelling the playing field for an honest appraisal of production.

The comparison production report, which is some 20-30 pages, includes an energy-corrected value for fat, protein, and lactose components – literally identifying the cows that are pulling their weight.

Rensinus says, “It’s all based on the production. The same herd-test analysis also looks at the correlation between body condition score and production, and fertility and production to see if they are related to production or not.

“Also, I want to prove or disprove the value of BW [Breeding Worth], LW [Lactation Worth] and PW [Production Worth] so I look at correlation between those values and the production produced to date when it is corrected for energy.

“It ranks of all the animals with a high somatic cell count – when protein to fat ratio is more than 100%, those cows are usually the ones that aren’t feeling well – and provides, among other things, all the sires that are being used and how many have been sired by any given bull and what the average production of that group is.

“Every cow is ranked from the top to the bottom, and they can identify their best cows or make their culling decisions from there.”

David’s passion to move away from heavy nitrogen use means they are working hard to find the magic mix, which now includes humates and fish hydrolysate.

“We used to be very high urea users, applying up to 220kg of nitrogen/ha a year,” David says. “We would follow the cows with it non-stop. But to me, a liquid fertiliser made sense, and since 2011 we have been working on greatly reducing nitrogen’s use. I dissolve what we do use in a sprayer with a solid agitation, so it’s well dissolved before it’s applied.”

Mike acknowledges, “We have never regretted that decision, but there have been moments of anxiousness through the years when the grass situation tightened.”

David continues, “My goal is to get the soil right. For every 1% of carbon you put in the soil, you get another 150,000 litres of water per hectare, so if you can get healthier soils, you can make a big difference.”

The pair has introduced a lead feed before calving and – combined with spraying the springer and colostrum paddocks with magnesium sulphate – milk fever and ketosis are also largely challenges of the past.

Mike says, “We used to have 10 cows go down a year. Now those numbers are more like two, and both of those cows responded without us having to use the hip lifters. Rensinus gets across a lot of those bases when he sets the spring feeds.” 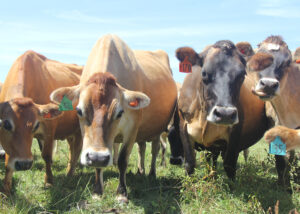 Production to a whole new level

As the two men prepare to return to their respective jobs, they say their decision to question themselves has been well worth it.

David says, “The good thing with Rensinus is that he listens, and he keeps an open mind to work with us on things that we also like – like my interest in soil health, but within that, he has taken our production to a whole new level.”