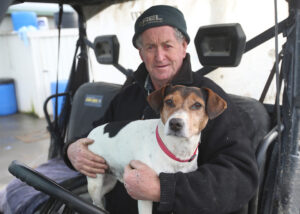 A free-stall barn has helped a Mid Canterbury family re-angle its dairy business and sustain production through some of the worst flooding their region had been exposed to in 200 years.

When the Stewart family first invested in their imposing 140m x 75m barn back in 2013, the subsequently falling milk price turned it into a bold move that raised some eyebrows.

However, with some resilient thinking, this family – anchored by David and Maree Stewart – weathered the challenge by switching up the business and including some bright minds with different thinking to make it work. The barn has now become a central part of the family’s ability to harness premium winter milk contracts, as they move towards 70% autumn-calving pattern on their 550-cow herd.

It also helped them traverse the region’s flood disaster late in May, which has forever buried 14.5ha of their farm under riverbed rubble.

This is the first season that David and Maree’s sons TJ and Mark, together with his wife Stacey, have taken over leasing the operation.

Barwell Farm is sandwiched between the north and south banks of the Ashburton River, making the Greenstreet neighbourhood one of the worst-affected areas. The flood’s calling card also included deep layers of silt, trees and stones on another 20ha of the pastures around the dairy, which will take time to bring back into full production. In all, 50ha was impacted and 15km of fencing was wiped out.

The late, cold spring compounded feed shortages for many, and ravaged other winter-milk production across the region.

Yet, Barwell Farm’s production is up 3.3% YTD, with the operation managing to stay within its pre-flood feed budget. Because they could use the barn, damaged pasture has had time to recover, meaning the pasture that needs more work hasn’t hurt production by being out of a grazing rotation.

The autumn calvers that went through the flood are still on target to produce more than 650kg MS (milk solids) per cow in 280 days. Their winter contract was 600kg MS per day.

Stacey said, “We sat at 700kg MS per day all winter. I think this is the best the cows have looked this winter compared to previous years.”

The numbers support Stacey’s observation. Usually, they would be averaging around 1.8kg MS/cow/day at this time of year, however, at the time of writing, they were averaging 2.3kg MS on 550-cow herd (with 320 autumn calvers). 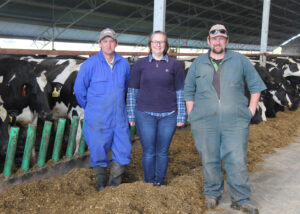 Brothers Mark (left) and TJ Stewart flank Mark’s wife, Stacey, in the barn that has allowed them to remain on track with their production this season despite the crippling floods which forever buried 14.5ha of their Mid Canterbury farm under riverbed rubble in May 2021.

Not all beer and skittles

Barwell Farm didn’t lose any stock, but they were scrambling, and the milking herd spent 20 hours standing in the dairy yard without feed, water or milking after their owners were evacuated. David and Maree’s home was flood damaged leading to their evacuation, with photos of the family’s 10-year-old fox terrier, Max, making national news as he was loaded to leave.

Before they were evacuated, the Stewarts rescued their dry cows – who were up to their hocks in water by the time the family reached them. They then walked the animals to Glenalla and Snowfed Farms, owned by the Gilbert family, which gave the Stewarts free grazing for 180 head.

Local farmer Duncan Barr, who has a lot of experience in disaster planning and working with government agencies, visited and helped the family rationalise their shock and devise a plan. Angela Cushnie, from Federated Farmers, was also active in the conversations.

The Stewarts, who will have to climb over some $150,000 to $200,000 in flood-damage costs, said community support was critical in the aftermath, and the continuing solidarity remains a high point in the horrifying experience. 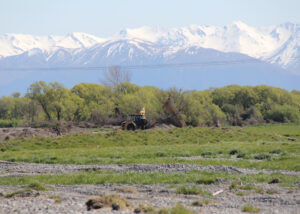 An example of the devastation which is too final to ever be pulled back into production.

Sustaining the family business and production has landed in the ballpark of MilkMaP’s Senior Farm Business Consultant, Cameron Burton.

Having helped balance cow nutrition with profitability for the last three years, Cameron has now helped them work through post-flood feed budgets, strategies to sustain production, submitting insurance claims, and righting the cows’ ship in general. His work has allowed the Stewarts to sustain cashflow.

The farm swings between a total and partial mixed ration; whether livestock are fully pasture-fed depends on the time of the year and the weather.

Cameron said, “There was naturally a bit of stress around the environmental impacts at the time and there were suggestions from some to go to once-a-day milking. We quickly decided that wasn’t going to be the way forward.

“During the floods we talked about how to bring the cows back onto their milking ration from having only straw available for 24 hours, and we were happy to see a rapid increase in production over the 10 days post-flood with no metabolic issues or acidosis. We did have some somatic cell count issues, which we expected with a high-production herd that had fresh and peak-flow cows who had missed a few milkings. But they’ve got through that now.”

The Stewart family’s Fox Terrier, Max, was introduced to the nation as he was loaded into the evacuation rescue vehicles at the height of the flood. He is pictured with David Stewart. Photo: Adam Burns, Ashburton Guardian.

TJ said they have been pushed and tested as they work to bring the pastures back into line, but the way the cows had coped had been incredible. With Synlait paying up to $13kg MS (for winter milk) the Lead with Pride producers are relieved that they have kept their production on-track. TJ said the barn had been pulling its weight for several years, but really came into its own this season.

“The carryover and autumn-calving cows are usually in the barn from late April to early May for one feed a day and overnight,” he said. “They are then in the barn 24/7 from late May to mid to late September. By late October, we would usually shut it down until the next autumn calving – unless the season was dry in late summer.

“What the barn does is give us options to sustain production and maintain cow comfort,” he said. “It’s been a great add-on to the farm, and we wouldn’t farm without it now.”

TJ said Cameron’s role has been to help them to feed more efficiently for the business. They are driving the bottom line from per-cow production on the system 5 feeding. For the past two years, it has included a formal lead feed to prepare cows for calving, which has made an impact on fresh cow performance.

“With Cameron’s advice, we bought in the raw materials and we just followed his recipe to make up the lead feed ourselves,” TJ said. “We had the mixer wagon, so we decided to use it. It was a bit more work, but the cows are milking better because of it, without question. I’d kind of done something like it before, but never as robustly as we’ve done in the last two years.”

Stacey said she’s also noticed the response in the cows.

“The cows have slick coats, they calved in really well and transitioned right,” she said. “This spring calving we had the least milk fever we’ve ever had. We calved 320 in the autumn and 270 in August and September. In the autumn, we had eight to 10 downer cows. In the spring, we got to the middle of September before we had any issues.” 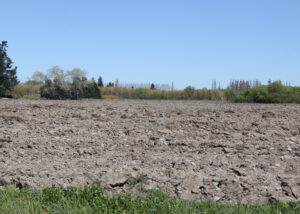 The flood’s calling card not only wiped out 14.5ha of the farm, it also left deep layers of silt, trees and stones on another 20ha of the pastures around the dairy, which will take time to bring back into full production. In all, 15km of fencing was wiped out, and yet Barwell Farm’s production is up 3.3% YTD. The operation has also managed to stay within its pre-flood feed budget. Using the barn has given damaged pasture time to recover, without hurting production.

Cameron said refining the business has positioned the family to make the most of its natural advantages.

“I think the big game-changers come down a few things: probably largely around how they have set up their business by including the winter milk and reducing feed costs, and including a better diet formulation to increase per cow production. It has added to the overall economics of the farm.

“We now make the most of the mixer wagon and the ability to feed different diets to each group. They worked really hard this spring when we formulated the Do-It-Yourself DCAD [dietary cation anion difference] lead feed mix.

“There is no doubt that having the barn on-farm has meant that they can continue their winter milk contract and spring calving with very little impact on their production, which ultimately controls their profitability.

“They have invested in some great infrastructure in the last few years – barns and centre pivots – and we have spent a season setting up and making some changes, which will really pay off this season. They are now in a very exciting position.”

The family has also been able to easily complete their flood-insurance claims with Cameron’s support.

“I was able to model the impact of the loss of land and infrastructure, which quantified the additional feed we could expect to buy or claim,” Cameron said. “I also formulated a ration which could replace the maize that was water damaged with the feeds that we had available at the time.

“Because obviously, maize is only harvested in the autumn, and we were well into June when we needed to make the changes because of the floods.” 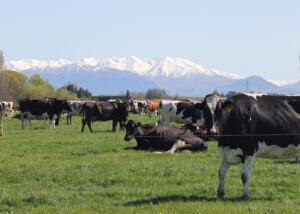 Making the most of the farm’s advantages combined with its barn has now become a central part of the family’s ability to harness premium winter milk contracts, as they move towards 70% autumn-calving pattern on their 550-cow herd.

‘Can still be our year’

Stacey said the final wash-up has proven to them how much resilience they have, and they remain optimistic about the industry.

“This year when we took over the farm was supposed to be ‘our year’,” Stacey said. “Then the floods came, and we instead started to think, ‘Maybe next year will be our year’.

“But, no. Actually, we are now back to thinking this year can still be our year.”