Sara Russell is focused on the complete picture at Ngatimaru Farming Co.

Focusing on Body Condition Score (BCS) has lifted Stuart and Sara Russell’s six-week in-calf rate from 75% to 83%, and given them the confidence to use sexed semen.

The couple sharemilk 50/50 with Sara’s parents, Richard and Diana Bourke, in Mid Canterbury’s Ashburton. They milk 760 cows, including their registered Jerseys, Ngatimaru Jerseys, on 280 hectares through a 54-bale rotary. The land also carries all the young stock.

The Russells do most of the work themselves, and have used technology and their MilkMaP farm consultant, Andrew Trounce, to stay on top of everything from cow health and compliance right through to putting together their sharemilking agreement.

They are also part of their processor Synlait’s Lead With Pride™ programme, which recognises and financially rewards suppliers who achieve best practice. While it adds another layer of administration for Sara, on top of the tough environmental-compliance rules, the Russells believe it’s worth it.

Another challenge for Ngatimaru Farming Co. is that it is shaped a bit like a map of England, which has made the centre pivot irrigation conversations a little more challenging. The couple has five irrigators to get around every corner and sharp edge on the property.

Without labour, technology is vital

None of their production and cow-health goals could happen on a busy farm without either labour or technology.

Stuart, 39, and Sara, 37, chose technology. And they’ve put their own shoulders to the grindstone.

SmaXtec boluses have been used on the whole herd for heat detection, health and individualised in-shed feeding. In addition, they appreciate the fresh eyes, knowledge and solutions that Andrew brings with MilkMaP.

The herd is almost 90% Jersey, with an average production of 485kg milk solids (MS) production per cow, based on 700kg of supplements per cow a year.

BCS anchors everything at this farm. Sara is a credited BCS evaluator, and she and Andrew score the herd four times a year.

Sara says the BCS results are linked with the herd test results, and a detailed report is then generated to help formulate their different feed groups in the milking herd. Sara says making the connection between production and BCS is important for the bigger picture when it comes to reproduction.

“For us, that BCS and production assessments with regard to different feed groups has paid off in terms of our mating results. To have that 83% six-week in-calf rate with an 8.5% empty rate for 67 days of mating was important.

“It’s about being aware of the condition of the cows and prioritising that.” 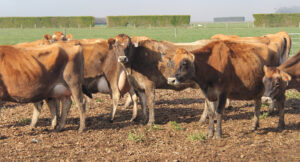 Sara says BCS is a science that gives them an endgame.

“When you’re nailing that September BCS and feeding the lighter cows up selectively, they have a higher chance of supporting that extra will to milk, while giving them every chance to get in-calf earlier,” she says.

“You’re not spending more total money on feed – you’re just prioritising the cows that are giving it back to you.”

This gave the Russells the confidence to push forward with sexed semen for the first time last mating. They also started twice-a-day (TAD) mating, which they believe also had a significant impact on their in-calf rates.

As calving heated up this season Sara and Stewart were grateful that Sara had help in the calf shed for the first time (from her sister-in-law Maria Watson). They also took confidence from the fact that Andrew had calculated the estimated grass growth, and herd feed supplementary requirements on any given day.

“Andrew also calculates how many cows we should have in milk every day. So no matter how busy we are, we have that information to fall back on and refer to,” Sara says.

“As the cows calve, the average cows come into the dairy getting 1.2kg a day of grain and 800g of a hard-feed blend.

“But any cow that produced more than 565kg of MS last season immediately starts on 2kg of grain. Because we know she worked hard last year and we know that she is either going to milk it off her back, or she needs the extra feed to start firing.

“In another two or three weeks I’ll have a look through, and anyone I’m worried about I’ll create a group for, and they will get preferential feeding in the lead up to mating.”

OAD milking not the way

Sara says she prefers feeding more to build cow condition rather than dropping any lighter cows to once-a-day (OAD) milking – bearing in mind that lighter cows are often milking harder.

“We believe that OAD milking is often doing those cows a disservice, because there’s no way she’s going to eat the same amount in the shed OAD as she could eat milking TAD. We believe it’s better to be milking her TAD – to get the milk off her – but giving her more hard feed so she’ll gain more total energy than she would being out in the paddock. Grain is the high energy feed.”

BCS has also given Sara and Stuart the confidence to trust in AI, which has saved them the cost of buying up to 20 mop-up bulls every season. They do still use bulls over their R2 heifers, but those pregnancies are all aged.

“We always had a pretty strong AI-game,” Sara says. “Stu does it all and we realised we were wasting a heap of money buying 15 to 20 mop-up bulls to get another 40 to 50 cows in-calf to ‘nothing’ bulls. It didn’t pay when you consider a short-gestation straw of semen costs $15. The TAD mating also helped with that.

“That gave us a 56-day calving on the short-gestation bulls for the last 8.5% after 67 days mating.” 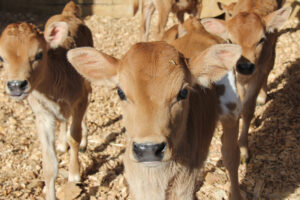 Sexed semen has been used and instead of mop-up bulls. Stuart and Sara Russell say it’s more cost effective and meaningful for their operation to use short-gestation semen.

Donovan said their next goal was to get the production out of the genetics.

In their first season they didn’t feed grain, relying on grass, silage and limited palm kernel (PK) through the drought. It yielded a 400kg MS per cow average production, which was a record for the property at a total MS of 83,000kg; the previous best was 55,000kg MS under different management.

To bridge that gap they employed MilkMaP’s senior farm business consultant Rensinus Schipper, who they met through Jim Webster. Rensinus helps with their annual financial targets – including setting up their annual budget for milk yield, crop selection, pasture growth, supplement selection, usage and cost. He also helps with how they manage their stocking rates to achieve their profit targets.

The long-game includes achieving great growth rates on their young stock, thus lifting the feed efficiency in their first lactation, and increasing their potential longevity in the herd.

Donovan said: “We decided we wanted to push the system. We wanted to break records, and if we were going to spend a lot of money on concentrate feeds, we wanted to do it properly, and get it right.

“Neil and Helen [Walker] have a green ethos, which we’re aligned with as well, so we wanted to move away from PK feeding as much as we could. We feed some, but it’s only one quarter of our total concentrates.” 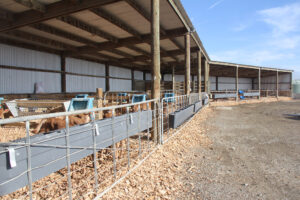 Organisation in the calf sheds is key at Ngatimaru Farming Co.

Their other concentrates include maize grain, canola meal, tapioca, distiller’s grain, soy meal, soy hulls, vitamins and minerals. Their stocking rate is 3.1 with the goal of milking less cows and expecting more of them.

“Rensinus has definitely challenged our thinking and our theories a lot. We do things a lot differently now that we have him on board,” Donovan said.

“We are much more in tune with what our cows want and need. It’s early days yet, but I’m hoping to see improvements in our business performance as well, so we will have happy cows and happy people. Every time Rensinus comes to see us, he sees something new. He’s definitely a key part of our business nowadays.”

Donovan said their animal health and reproduction had initially been compromised in the chase for production. However, this year there has been a dramatic improvement and they are transitioning through calving much better.

“We don’t enjoy looking at the Jerseys in the paddock as much, and they just don’t have that lovely temperament that we love about the Friesian. Sophie is also very much into conformation, and she looks at each cow as an individual.

“We’re just starting our breeding journey, but we have sold some bulls into AI companies and there is such demand for the crossbreds. We hope to get to a stage we can diversify our income to include elite genetics.” 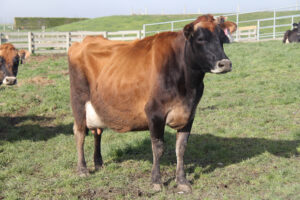 But the total endgame remains simple.

“Farm and land ownership and a place to call our own. We are always looking for new opportunities,” Donovan said.

“I think since COVID-19, it’s become more important to have your home, your security and somewhere for your family to fall back on.” 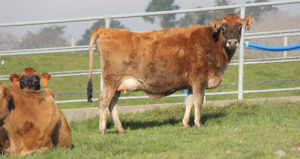 Bulls were used on the R2 heifers, but those pregnancies are all aged.