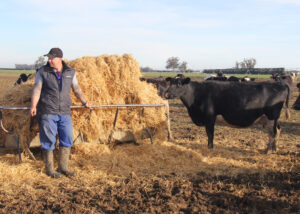 Straw is an important part of the farm’s daily feed management for Mike Copland.

Mastering feeding volatile fodder beet to their milking herd in autumn and the early dry period has saved Mike and Michelle Copland about 150kg per cow of in-shed supplements.

The couple is involved in a hybrid business partnership with Mike’s parents, milking 750 cows (780 last season) in Mid-Canterbury’s Ashburton. Mike’s parents, Helen and Lyndsay, own the land, and Mike and Michelle own everything else. They pay 18% of the milk cheque to the Copland seniors and lease the run-off blocks from them. The total holding is 291 hectares (214ha effective milking area). There are two centre pivot and three Rotorainer irrigators on the milking platform. The run-offs each support a Rotorainer.

Mike, 38, says the end-game is farm ownership. A generational cropping farmer at his roots, the family switched to dairy in 2001, which brought new systems and new feeding regimes. Hay and silage is all made on-farm, and Mike also buys in some hay from a cropping neighbour, who he then helps in turn with his harvest. All young stock are carried on-farm.

Mike’s average production is 530kg milk solids (MS) per cow. To get to that number for the right cost of production, he has drawn on his extensive cropping knowledge and combined it with some talented technical support networks within this dairy-strong region.

Mike works with MilkMaP’s Senior Farm Business Consultant Cameron Burton, who helped him work through the delicate dance of balancing the potential metabolic challenges of feeding cost-efficient fodder beet during late lactation and in the early dry-cow period.

Mike says, “Cameron is really good with nutrition at giving me a good monthly overview of my supplement usage and the response rates we get for them.

“He also helps with the target growth rates, and filling in the feed gaps to balance everything out.” 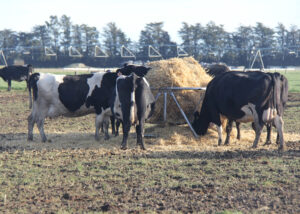 There is always straw available for the cows.

Cameron says there is a reason that New Zealand dairy farms who are feeding an increasing amount of fodder beet in winter are seeing anecdotal increases in empty and poor six-week in-calf rates.

Fodder beet has 30-50% of the phosphorus (P) found in either pasture or kale, and is well below the US National Research Council’s recommendations for P supplementation in dairy cattle.

A moderate deficiency in P may be associated with cows failing to conceive. A more severe deficiency can delay cycling activity post-calving because of inactive ovaries.

Cameron says, “If the cow’s ability to replenish her P reserves throughout the winter period are restricted by her diet, then the cases that we are beginning to see with infertility, downer cows, and poor lactation performance will continue to increase.

“Farms that are already experiencing these issues to any degree will not be able to reverse it by supplementing P only through the dry period. There is a maximum rate of P absorption and bone mineralisation, and the six to 10 week dry period will not be long enough to build adequate reserves.

“P supplementation must start earlier than when the cows begin eating fodder beet if the P deficiency is to be resolved.”

Cameron says that while fodder beet is in Mike’s autumn-milking herd diet, he supplements additional P with silage or PK. Through the winter, Mike also offers loose licks from the Dairy Business Centre. They increase the supply of the deficient P and also allow Mike to feed calcium and magnesium – which are both critical for the cycling and storage of P in the cows.

“Monitoring of Key Performance Indicators like metabolic issues, cow performance, heats, and reproductive performance give us an indication of where the cows’ mineral status is,” Cameron says.

“Additional testing of their blood P will also give an indication if there is a deficiency. However, it should be noted that blood testing for P is not 100% conclusive because P is stored in the bones, and not the blood. It makes ascertaining where the cows’ precise mineral reserves are almost impossible.” 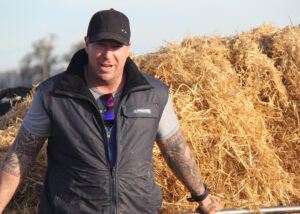 Mike confirms that the knowledge has allowed them to confidently work with fodder beet.

“It works out at 8c/kg to grow,” he says. “You do have to transition the milking herd on to it very slowly – as Cam says – because of those potential metabolic issues.

“We start off feeding 1kg per cow, then we move to 2kg for a few days, and so on until we’re feeding up to 5kg at around the two-week mark. That’s the most we would give the milkers.

“It’s high energy, they put on weight, and it extends our lactation to 310 days.”

This season it gave the Coplands 49 days downtime until they started calving – which is the withholding period for Cepravin dry cow (used on the R2s only this season).

Mike says they used to be stretched by metabolic issues when their dry cows were moved to the springer paddock two weeks out from calving, because they used to take the fodder beet out of the ration at that point (after feeding up to 9kg DM/cow/day).

“We found a lot of them would go down without that energy and they were crashing,” he says.

“We now manage and wean the cows down off the beet – while increasing their silage and straw – before they come back to the springer mob.”

He says they also include maize for the springers and use a dietary cation-anion difference (DCAD) diet to increase calcium utilisation and reduce both clinical and sub-clinical milk fever. 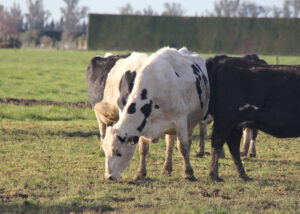 The cows are usually around 5.5 Body Condition Score before calving, dropping back to 4.5 during peak production.

Mike says managing the cows when they come off fodder beet is just as important.

“This year is probably the most detailed we’ve been with regard to that. Cam and I have worked out that transition in different age groups for different calving dates, because I never want them calving in a crop paddock again.

“They need time to change that gut and get on to the pasture and maize so they’re ready for the milking herd.”

Mike says the results have made the work worthwhile.

The cows are Body Condition Scored every two months with Cameron, and are usually around 5.5 before calving, dropping back to 4.5 when they are in peak production.

“We always have straw available for the cows – on the laneways – and in the paddocks. They need it, they eat it, and it helps with that gut-fill, and it keeps them happy.

“We have no problems with lameness and our tracks are fairly average, to be fair. We haven’t spent a lot of money on them and we only have lime around the dairy shed.” 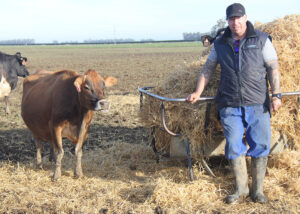 Mike Copland says their recent buy of some Jerseys has worked out well.

Mike is heading into this season feeling in control when it comes to nutrition and cost.

He says, “Cam makes sure that everything we do is profitable and that we get a bang for our buck.

“He keeps me in check, really, from a cost perspective versus a response rate.

“It’s all about those response rates, getting more MS per cow, and less empty rates.”